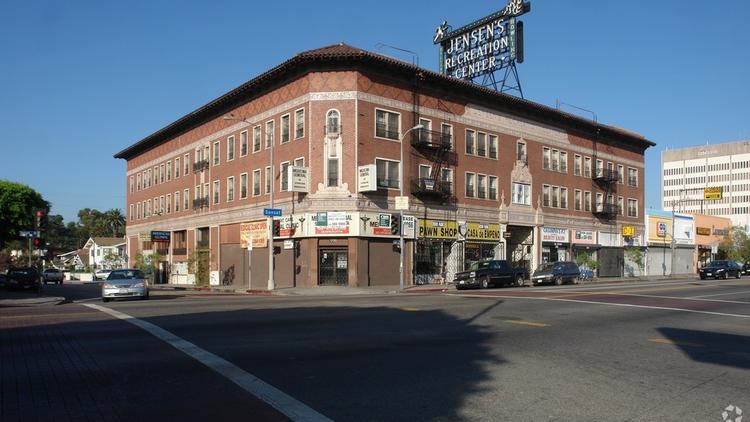 Jensen’s Recreation Center, a 1920s landmark in the heart of Echo Park, has sold for $15 million.

The 50,000-square-foot brick structure near Echo Park Lake has retail and office space on the ground floor and 46 studio and one-bedroom apartments upstairs. Tenants include Blue Bottle Coffee and Sage Vegan Bistro.

Jensen’s Recreation Center was one of the first buildings in Los Angeles to feature a mix of residential and entertainment uses. It was declared a Los Angeles Historic Cultural Monument in 1998.

When completed in 1924, the building included a bowling alley and billiards parlor. The original 17-by-28-foot articulating incandescent sign that depicts a bowler throwing a strike remains on the roof.

Vista will invest as much as $1.25 million in improvements including upgrading the building entry, lobby and other common areas, Vista President Jonathan Barach said It will also fully restore the historic rooftop sign.

“Jensen’s Recreation Center is a neighborhood treasure in one of the trendiest pockets in Los Angeles,” he said. “

Vista acquired the building from Sunset Holding Co. in an off-market transaction, said attorney Andrew Kirsh, who arranged for Vista to assume the existing mortgage.

“Vista has had its eye on the property since acquiring its first asset in Echo Park in 2010,” said real estate broker Darin Beebower of Madison Partners, who represented both parties in the transaction.