With housing costs skyrocketing, rent control is on the docket again in Sacramento 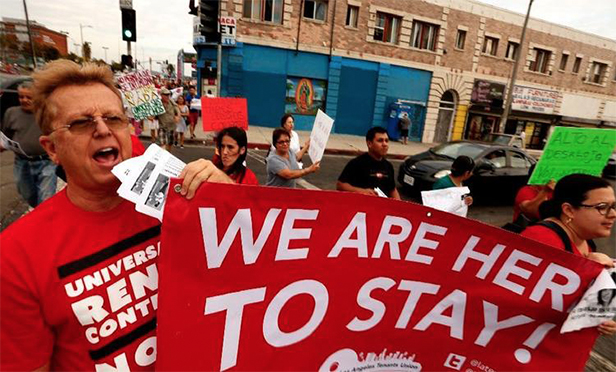 Amid California’s housing crisis, several state lawmakers want to give cities the ability to dramatically expand rent control, including imposing the kind of strict limits that once existed in Santa Monica and West Hollywood but have been barred since the 1990s. A bill that would do so, introduced last month, marks the most significant move yet in a growing movement to cap skyrocketing rents as California’s economy booms and housing production lags.

Protests over the high cost of housing and aggressive landlord tactics have erupted in Los Angeles and throughout the San Francisco Bay Area. And voters in two cities up north passed new limits on rent increases in November, seeing them as a way to stop dramatic hikes that have displaced lower- and middle-income households.

But cities can only go so far in capping rents — something AB 1506 seeks to change. “The momentum is very much on the side of rent control,” said Dean Preston, executive director of the statewide renters group Tenants Together. The bill has drawn swift opposition from apartment owners and probably faces a tough slog in the Legislature. Nevertheless, opponents and supporters see its introduction as the start of a longer fight over rent control in Sacramento.

Specifically, the bill would repeal the landmark Costa-Hawkins Act, a 1995 law that an executive with the California Apartment Assn. referred to as the “saving grace” for landlords.

The law set ground rules for future and existing rent control ordinances, including banning single-family houses from caps and putting restrictions on what sort of apartments can be covered.

Now, cities establishing ordinances can’t place controls on apartments built after Feb. 1, 1995, and cities with controls at the time of Costa-Hawkins can’t extend their programs, usually meaning units built after the late 1970s can’t be covered.

The act also did away with tough regulations in five cities, including Santa Monica and West Hollywood, that limited rent increases even when an apartment was leased to new tenants. Now, landlords can charge market rates for vacant units, but increases are capped once a unit is occupied.

Repealing Costa-Hawkins wouldn’t immediately change rules in local municipalities but would give local officials more flexibility to craft new laws and apply them to far more rental units. About 15 California cities have some form of rent control, including San Francisco, Oakland and Los Angeles.

The L.A. law was passed in 1978 and generally applies to buildings built before October of that year. It allows landlords to charge market rent for a vacant unit, but then limits annual increases for tenants at 3% to 8%. “Costa-Hawkins provided relief for landlords, but in the process we are seeing an escalation of costs for tenants that at this point in time is untenable and that needs to be addressed,” said Assemblyman Richard Bloom, who introduced the bill with two colleagues and represents Santa Monica, West Hollywood, Beverly Hills and parts of Los Angeles — all areas with rent control. Many economists say controls can worsen what they see as the root cause of California’s affordability problems: a shortage of homes after decades of building too few for the state’s growing population.

They say limits on rent increases discourage residents — even well off individuals — from moving, a lock-in effect that puts upward pressure on rents for units that do become available.

Opponents of the bill also say housing production could drop off if Costa-Hawkins was repealed and developers become spooked that new buildings would be subject to controls.

“We have a housing shortage,” said Earle Vaughan, an apartment owner and legislative chair for the California Rental Housing Assn., an industry trade group. “Do you think anyone in their right mind will build an apartment building if the thing can be rent controlled at any time?”

If rent was capped for new developments, it “almost certainly would discourage home building,” said analyst Brian Uhler, who wrote the report. But if cities just put limits on more existing buildings, “the effects on home building would be less clear.” Bloom, who co-wrote the bill with Assemblymen David Chiu (D–San Francisco) and Rob Bonta (D-Oakland), said he’s open to changes in his bill and characterized it as one effort to address a situation in which more than half of California tenants pay rent that is deemed unaffordable.

Median apartment rents in Los Angeles County have risen 23% in the last three years to $2,390 in January, according to real estate firm Zillow. The statewide median was $2,346, up 26% from the beginning of 2014.

“Given the level of the crisis,” Bloom said, “this is a good time to take a step back and look at Costa-Hawkins for reform.”

One major change landlords especially fear is losing the ability to set rents when a unit becomes vacant. In the 1980s and early 1990s, such restrictions were credited with keeping Santa Monica relatively affordable, though rent-control critics said it also discouraged landlords from spending money on maintenance, causing buildings to fall into disrepair. Jonathan J. Barach runs Vista Investment Group, which owns roughly 750 rent-controlled units in Los Angeles. His costs often rise faster than he can raise rents on existing tenants, he said, but being able to lift rents to market rate after a tenant leaves makes it easier to keep properties in good shape. That includes fixing up Echo Park’s Jensen’s Recreation Center building with its 46 apartments. When Vista purchased the 1920s building in 2014, Barach said plumbing and sewer lines were “constantly backing up and pipes were bursting,” but the problems are now fixed. He said refurbished studio apartments at the building are now going for about $1,700. Some long-term tenants who moved in before the area became attractive to well-off young professionals are paying “well under” $1,000. “We want tenants to enjoy the building, but it needs to make sense financially,” Barach said. In Long Beach, which doesn’t control rents, tenants are increasingly seeing eye-popping hikes. One elderly tenant recently reported a $925 hike on a $1,100-a-month, two-bedroom unit, said Josh Butler, executive director of advocacy group Housing Long Beach. ”A rent increase of that magnitude is tantamount to an eviction,” he said.

Those stories are driving support for caps, as well as strong eviction protections that typically are elements of the ordinances. That’s particularly true in the expensive Bay Area with its explosion of tech wealth. In November, voters in Richmond and Mountain View, home of Google, approved rent control ordinances that the California Apartment Assn. is now fighting in court. Like most ordinances, the laws tie increases to changes in the consumer price index and require a “just cause” for eviction — such as damaging a unit or failing to pay rent.

Beverly Hills also strengthened its current ordinance this year, reducing the maximum annual increase to 3% from 10%.

But with Costa-Hawkins in place, cities are limited in the number of units they can include for protection. Advocates say that’s a particular problem, because under state law landlords can get out of rent control by converting rent-controlled units into condos, or by selling the building to developers that level the structure to build luxurious for-sale housing. In Los Angeles, property owners have removed thousands of rent-controlled units in today’s hot housing market, a dynamic that was a major focus of the debate surrounding Measure S, the anti-development initiative that failed on the March municipal ballot.

Larry Gross, who heads the local tenant group Coalition for Economic Survival, said expanding rent control is vital, because it provides tenants with a stability akin to homeowners with a fixed mortgage, giving lower- and middle-income folks a better shot at staying in expensive cities. Gross, who pushed for passage of L.A.’s law decades ago, panned business groups’ assertion that construction would drop off if Costa-Hawkins was repealed.

“Builders want to build here,” Gross said. “Rent control provides protection and levels the playing field.” No matter what happens in the Legislature this session, “at least we’ve finally been able to get the discussion [going],” he said.

Debra Carlton, senior vice president for public affairs with the California Apartment Assn., said the group is taking the threat of a repeal “very seriously.” "I think it’s — unfortunately — the beginning of the conversation," she said.