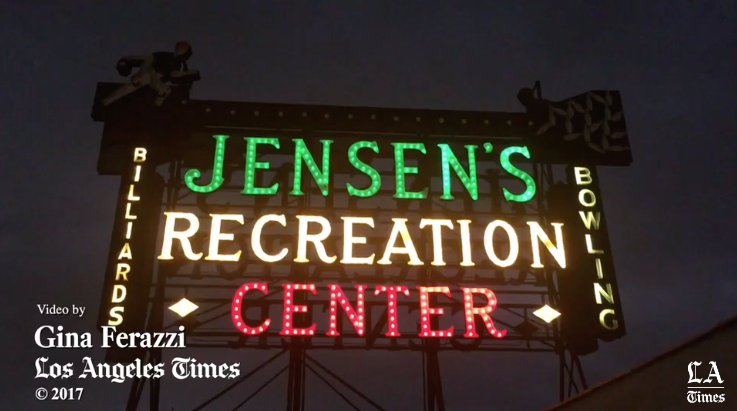 The sight of a very persistent bowler throwing strike after strike looms high over Sunset Boulevard again, now that a nearly century-old electric sign has been restored.

It's atop Jensen's Recreation Center, a 1920s landmark in the heart of Echo Park that was one of the first buildings in L.A. to feature a mix of residential, retail and entertainment uses. It was declared a Los Angeles Historic Cultural Monument in 1998.

When completed by business leader Henry C. Jensen in 1924, the three-story building included a bowling alley and billiards parlor. To entice patrons, Jensen put a 17-by-28-foot incandescent sign on the roof that depicted a bowler throwing a strike.

The sign is articulated, meaning it lights up in a programmed sequence. Colored lights saying "Jensen's Recreation Center" light up in three pops. Then a male bowler appears on the left side and appears to launch a ball that slowly travels across the sign and then scatters a set of pins on the right side.

Considered groundbreaking technology at the time of its installation, the sign is controlled by a series of electric motors that switch the 1,300 red, green and white light bulbs on and off to give the appearance of movement.

The sign was mostly dark for about 50 years but has just been restored by new owners Vista Investment Group.

The Santa Monica real estate firm purchased the building at 1700 Sunset Blvd. for $15 million in 2014. It spent an additional $1.25 million on improvements, Vice President Nick Clement said, including a renovation of the sign overseen by Los Angeles vintage sign restorer Paul Greenstein.

"We wanted to do our part to restore an important part of that property," Clement said.

Jensen's Recreation Center has 46 apartments on the second and third floors. It no longer has bowling or billiards, but it does have a coffee shop, fitness studio, clothing boutique, and vegan restaurant and brewery. Clement is looking for a tenant for the vacant former bowling alley space, he said.

Animated incandescent signs predated neon signs, which became popular in the 1920s, said Eric Evavold, former board member of the Museum of Neon Art in Glendale. The Jensen's sign is one of the largest such vintage, operable signs left in the world, he said.

"It's incredible that this sign was just sitting there in the middle of the city for so long," Evavold said. "This is a special jewel in our illuminated sign history."