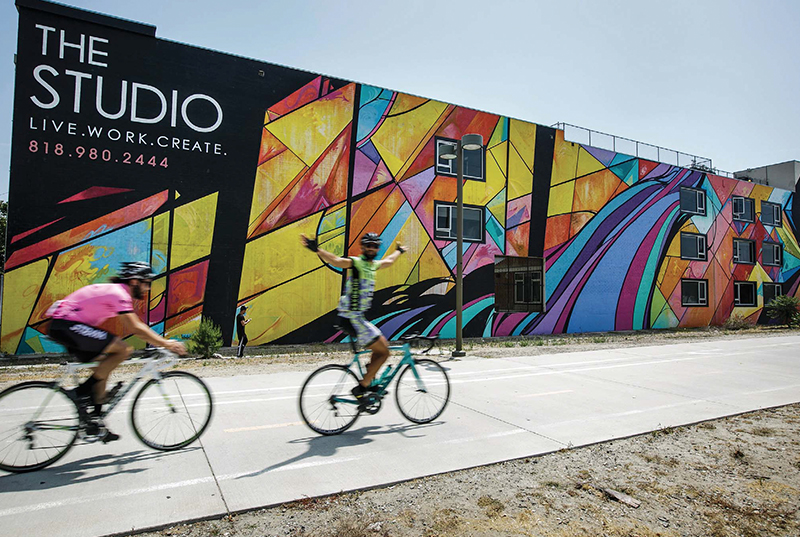 Solid beige and boring, the back wall of the former NoHo Lofts apartments in North Hollywood certainly didn’t symbolize its artsy residents. Nor did it reflect the Arts District location to the pedestrians and riders on the popular Chandler Bike Path behind the building.

But now a giant, multi-colored mural dazzles cyclists on the path, the result of a creative and cost-conservative renovation by Edward Ring and his Encino real estate investment firm New Standard Equities Inc.

Ring, a former comedy writer with an eye for architecture, takes on big apartment renovations that need more than just new paint and tile to stand out from the background. The rebranding and repositioning projects Ring does for investors usually look more expensive than they cost and deliver better-than-expected financial results.

“We like to be creative in those renovations where our creativity can help identify a property and set us aside from the competition,” Ring said. “We’re not afraid to make bold statements.”

Rebranded as The Studio, the NoHo apartment’s eye-catching mural by local artist DJ Neff cost New Standard around $15,000 in 2014, far less than the $50,000 or so a new stucco job would have cost, or the roughly $100,000 expense for a stone-like treatment, according to Ring.

After remodeling the interiors, the apartments captured such new demand and pleased its current tenants so much that owner Jonathan Barach, president and co-founder of L.A.’s Vista Investment Group, was able to raise new rents 25 percent and fully lease the building.

“We love the mural,” Barach said. “That (back) wall was like a big blank canvas facing a public bike path. We wanted – in conjunction with the rebranding – to make a statement, and we thought graffiti art was the perfect statement considering the type of building it is, where it is and what is interesting to the type of tenants that would occupy the building.”

When Ring undertakes an apartment renovation he doesn’t just see a building in need of a makeover, he sees a story. Ring’s artsy roots stem from receiving a Masters of Fine Art degree from New York University and writing professionally for “The Larry Sanders Show” and a series called “Malibu, Ca.” that ran in the 1990s and early 2000.

“Every building has a story, and when I come into the picture I look at that story and envision what comes next,” Ring said. “When we renovate, we’re looking for that next chapter and ultimately a really good ending with a repurposed, rebranded and reenergized project that also creates some nice value for our investors.”

New Standard projects have to meet a lot of specific criteria, especially now that upgrading tired, outdated apartments is a common strategy to justify rent increases. The projects the company takes on are economically in between very upscale communities and those that are lower-end, Ring said. They are in geographic areas seeing rent growth due to an influx of new jobs – such as parts of Los Angeles, San Diego and lately, Seattle, where technology jobs are exploding, Ring said.

“The worst thing in this market is to over-improve and not be able to make a return on that investment,” Ring said. “It’s a very, very specific market segment I’m going after – that segment of the population that is willing to pay a little bit more for something a little bit nicer, but can’t afford a brand new (home).”

Standard Equities only takes on low-risk projects, Ring said, and only after he studies comparables in the area, in addition to regional and local economic reports on the jobs and income situation, the new construction market and news stories about what’s coming into or leaving the area.

Seattle, where New Standard recently invested in a 20-building apartment complex needing a significant renovation, is a recent example. With more and more tech companies taking space there, housing is in demand. Standard Equities will transform an apartment complex of former military housing built in the 1940s with a new name and new elements that capture the 1940s era.

“We’re going to recreate a 1940s village out of the existing physical architecture,” he said. “We’re taking what’s there and enhancing that with styles from the 1940s, and street signs and benches – essentially creating something like ‘The Truman Show’ – that’s almost so perfect it’s fake. We want to capture the elegance of a bygone era.”

An apartment in the North Hollywood Arts District meant no or little constraints on what Ring could do. That flexibility doesn’t work in other locations, such as Beverly Hills, he said, where there are significant limitations on exterior designs.

Barach hired Ring because he wanted The Studio to better reflect its live-work design, which he planned to use to market more to professional artists and art-oriented small business owners.

To do that, the building was renamed and the interior renovations of its 68 units continued the building’s industrial look already started with polished concrete floors and exposed ceilings for the loft-style spaces. New Standard replaced typical apartment-style counters, tile and light fixtures with subway tile, hard stone counters and more modern, utilitarian light fixtures. It also refurbished the rooftop lounge. Ring wouldn’t disclose the overall cost of the work.

The effort also drover the occupancy rate to jump from 95 to 100 percent and newly leased units now rent for 25 percent higher than those leased before the redo.

“Typically, when you do renovations to a property and increase asking rates (by) changing the story of a building, then the market will tell you whether you succeeded or not by demand for the building,” Barach said.

Today’s tenants have a much more sophisticated design sense than 10 years ago, Ring said, thanks to so many home improvement and home-flipping shows. So his refurbishments have to be done smarter and with a more creative flair to make them stand out from the competition.

Ring takes advantage of new low-cost home finishes and materials that mimic much higher-cost originals, such as wood, stone, stucco and marble. That helps keep renovation costs at roughly $7,000 a unit for interior work, and $3,000 to $15,000 a unit on exteriors and amenities.

In some projects, he’s been able to raise rents for new tenants on updated units substantially – 21 percent – by turning two-bedroom, one-and-a-half bath units into two bedrooms with two baths by just adding showers and refacing the exterior with foambased materials that recreate a stucco look. He transformed one complex into a hacienda with the material and gave a Long Beach apartment complex artificial wood accents at one-third the cost of an entirely new exterior. For inside jobs, Ring saves money by buying in bulk.

“It’s no longer possible to just paint the pig,” Ring said. “Now you have to think more out of the box on how to create value for residents.”